Home Blog How we increased conversion rates from contextual advertising by 251% and said goodbye to the client
Tags:Case Site24 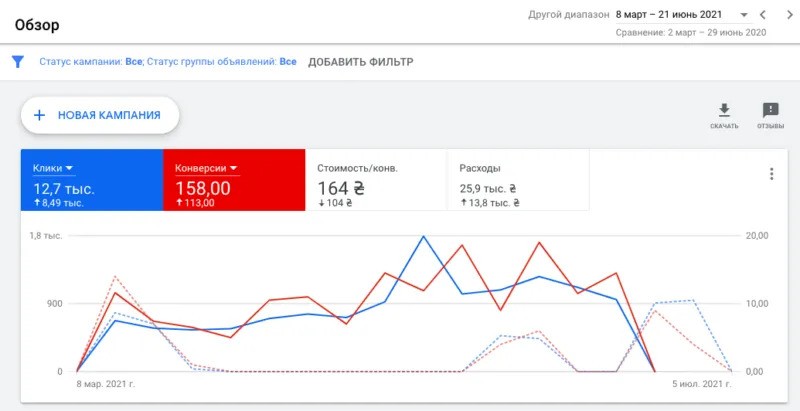 Task: to set up and optimize advertising campaigns in Google Ads
Business field: Education abroad
Region: Ukraine
Duration: 4 months (08.03.21-21.06.21, compared with the period 02.03.20-29.06.20)
*advertising did not work between periods, because study groups were not established
**periods compared had different duration (17 weeks and 15 weeks)

Initial setup: previous search campaigns did not bring expected conversions. In 17 weeks, there were 45 conversions for UAH 268 each. That is a low and expensive rate.

Goals and objectives:
– get as many leads as possible
– achieve sales goals (get the expected number of students applying for studies in Polish universities as clients).

What we did. In March, Polish universities opened for entry applications, and our work began.

Taking into account the previous statistics, we decided to create a separate campaign with conversion keywords.

For that, after analyzing all the keywords and search queries, we selected only those that had conversions. Then, we set up a campaign with a clear structure and a sufficient budget. It included only the keywords that previously showed a significant number of conversions. Other ones were kept in their campaigns with a minimal budget.

As a result, only this campaign generated 48 conversions in 15 weeks.

The campaign described above improved the results, but it still was not enough.

Thus, we decided to add remarketing. It brought 28 conversions over the specified period. Moreover, these conversions cost almost twice less than ones reached with regular keyword campaigns.

Then, we decided to test the Discovery campaign because it had worked well for other projects. We created one group that targeted people who entered specific keywords (we took keywords that gave conversions in other campaigns), and a second group – users who visited pages similar to competitors’ websites (data was taken from the auction insights report). Although the cost per click, in this case, was only 0.69 UAH, and it gave 1.07 thousand clicks, it did not bring conversions. We decided to stop the experiment and allocate the budget to test other options.

The next step was creating a regular display campaign with the same audiences. We excluded displays in mobile apps and selected effective marketing materials. This method gave immediate conversions. During the campaign period (May 20 – June 21), we get 18 conversions for UAH 167.

Next, we planned to test Smart GDN, but the client asked to stop the work – the study groups were full, and the advertising was paused until the next application period.

Thereby, the sales targets were met, and we said goodbye to the client 2 weeks earlier than last year. We are looking forward to the next season.