SEO promotion of a bag and accessory store 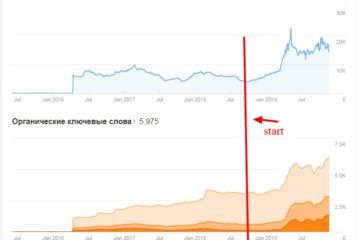 A case on how in a year of systematic work you can:

What’s at the start?

The site had good traffic, but due to the lack of positive dynamics, I decided to change the contractor.

Task on the project:

The main task was to increase SEO traffic on the site, especially in the priority key areas – men’s, women’s wallets, men’s bags and belts.

We always start working on a project from the preparatory stage. You need to understand what the main mistakes and shortcomings are present, what points of growth are on the project, what should be emphasized at the beginning of the promotion, how to choose the optimal path.

To do this, we analyzed the current results, and also made an analysis of the main competitors in priority areas. As it turned out, for the highest-frequency queries in the top, there are marketplaces and very large sites with which it is almost impossible to compete.

Based on this, it was decided to concentrate on bringing mid-frequency and low-frequency queries to the TOP – on the pages of categories and filtering. For them, the issuance was more diverse and the competition was less + this traffic was more conversion, more chances to reach the TOP-3. We also saw growth points – competitors generate page headers for filtering by templates that do not contain exact occurrences of the main queries of the clusters, there are not enough key entries, and texts are not everywhere.

Several directions were worked out very carefully every month:

It should also be emphasized that on this project, the copywriter constantly wrote texts for product pages, which was an additional plus.

After a technical audit, we found and fixed a whole list of problems:

Unfortunately, the client could not implement the Ukrainian version of the site due to the technical features of the CMS site.

What was already on the project before the start of SEO work:

We analyzed the existing inbound links in comparison with competitors and found the following shortcomings:

As a result, we drew up a plan for the formation of the link mass, taking into account the above disadvantages:

What links did you build?

They made a bias precisely on the quality of the link mass, and not on its quantity. After half a year of work, the budget for links was increased by 40%. exhausted normal sites and did not want to reduce the dynamics.

After the implementation of a good h1, title and text indexing, many groups of queries entered the TOP 10-20 and with the help of 1-3 links it was possible to raise them to the TOP-5. Higher frequency groups gradually began to grow.

It should be noted that there is seasonality in this niche, and in some months it is quite significant – therefore, it is worth comparing the results with respect to traffic and sales of the last year, and also analyzing the dynamics by positions in google.

For a year of work, we managed to increase traffic by 75% – below is a screenshot of a comparison of monthly traffic in 2019 and 2018.

Apparently, in some priority areas, the site has overtaken all competitors.

When starting SEO work, it is very important to decide on a general promotion strategy. In this project, we focused specifically on medium- and low-frequency requests for the most converting business areas. This is especially important in the context of a trend, when only aggregators and large sites occupy the TOP according to high-frequency queries.

At the same time, the emphasis on narrower categories allows you to take top positions quite quickly and with small budgets and brings targeted SEO traffic to the site.